If a tree falls in the woods, and is covered by a landslide, does anyone hear it?  Well, if no one hears it OR sees it for many millions of years, that tree may turn into stone. When Mother Nature manages to keep that fallen tree buried for a very long time, it goes through a petrification process and turns into petrified wood.   Thanks to a generous donation by Lew Smith of Smith Rock in Portland, visitors can now see a 5 million year old 10,000 lb petrified stump on display outside the World Forestry Center Discovery Museum.

The stump, found in North Dakota, is that of a Giant Sequoia tree (Sequoiadendron giganteum). Petrified wood occurs when a  tree is buried by landslide or other occurrence. With no oxygen available, the wood does not decay. Left undisturbed for thousands of years, the cells of the wood are slowly replaced by minerals carried in ground water. This process, called petrification, creates a stone image of the original tree.

First, there has to be an event that buries trees in a way that eliminates any air from getting into the wood. Without the oxygen, the wood does not decay and rot as it would on the forest floor.  The circumstance that usually causes this is an avalanche or, as was often the case in the Pacific Northwest, mud flows from volcanic eruptions that bury trees.

Second, the buried wood must remain undisturbed for tens of thousands of years with only a slow flow of water in the soil.  This flow of water is the key to petrification.  The molecules of wood are one-by-one replaced by molecules of minerals dissolved in the water. Different minerals will produce different colors. The rings, bark, and hard and soft parts of the wood attract different concentrations of minerals leaving a stone picture of the original wood.  The more slowly this takes place, the more detailed the picture.

Is there any wood in petrified wood?  Once the process of petrifaction is complete, there is likely none of the original wood left.  It has all been replaced by minerals. The different minerals leave different colors; for example, the reds you see may indicate iron deposits and the green could mean copper was present.

What can we learn from petrified wood?  Petrified wood tells us a detailed story of a forest from many millions of years ago.  Often the detail of the wood is so clear that the cell structure can be viewed through a microscope.  This allows the species to be determined and see how it compares with the trees living today. Many species have survived millions of years and are still on earth today. Others have died out and no longer exist.  Knowing the climate necessary for different species, it is possible to see how climates have changed over time. The individual rings may be evaluated to see how the weather patterns and seasons existed.  Information on insects and animals can also be seen in petrified wood.

The Discovery Museum also has a stunning collection of cut and polished petrified wood showing many different species and ages.

Built in 1909 by Lima Locomotive Works in Lima, Ohio, she was shipped around Cape Horn to Seattle and a few years later purchased by the Stimson Lumber Company. Peggy spent her life working first in forests of Washington and then Oregon.  She survived the Tillamook Burn and was retired from logging in 1950.

Peggy was donated to the City of Portland and proudly stood guard at the original Forestry Building that was built in 1905 for the Lewis and Clark Centennial Exposition. She survived the 1964 fire that destroyed that building and was then moved to Oaks Park in southeast Portland for storage.

In 1969-1971, members of the Pacific Northwest Chapter, National Railway Historical Society (PNWC) rebuilt the cab and wood sills in preparation for her move to the World Forestry Center. In 1972, with television cameras rolling, Peggy made her way up Highway 26 against the traffic flow where she was placed behind Cheatham Hall.

In 2003 the Lilley Family Foundation generously donated funds to refurbish Peggy, build a shelter for her, and move her to her current prominent location.  Once again Peggy found herself in front of television and newspaper photographers as she was gently lifted by a large crane and placed on her new tracks.

History of Shay Locomotives
The name of the Shay locomotive can be traced back to the man who was instrumental in its development, Ephraim Shay. Born in 1839 in Ohio, Shay would be a schoolteacher, soldier, husband, father, merchant, railway owner and inventor before he died in 1916.

Logging in the 1870s was done during the winter months when it was easier for loggers to move cut timber to the mills on sleds drawn by horse or oxen.  This inefficient and weather-dependant way of logging promoted Shay to build a tramway.

“In 1873 I owned and operated a sawmill at Haring, Michigan. Business was dull and prices barely paid expenses. I was compelled to reduce cost or quit. Logging cost $3.50 per thousand from stump to mill, using horses and logging wheels, the best known plan at that time. I built a tramway using maple for rails, procured a double-truck car, and tried the plan out; resulting in reducing cost of logging to 1.25 per thousand, but the cars would catch the horses on the downgrade sometimes and kill them. Brakes were impractical. Logs run from 12 feet to 75 feet in the same bill sometimes, and trucks had to be separated to suit the load. We usually let the cars run down alone.

Shay was determined to improve his methods. He recognized that ordinary steam locomotives were not well adapted to the rough roadbeds in the woods, so he developed  a locomotive that was basically a flatcar with a boiler mounted on it. Smaller wheels and flexible railway trucks beneath the body allowed this locomotive to maneuver better on the tracks. But the biggest change away from the standard locomotive was rather than two horizontal cylinders up front, Shay used two or three vertical cylinders located just ahead of the cab. To make room for these cylinders, the boiler was moved from the center of the body to about 15 inches left of center.  Crank shafts connected these cylinders to a flexible drive shaft.  These improvements created a locomotive that delivered equal torque directly to wheels on both sides of the engines at the same time. This allowed a more stable environment in which trucks could move independently and therefore had very little difficulty following poorly constructed roadbeds.

Most of the Shays used throughout the world were built by The Lima Locomotive Works, in Lima, Ohio. They were referred to as Lima Shays. Although developed in the late 19th Century, Shays were built by Lima well into the first half of the 20th Century. 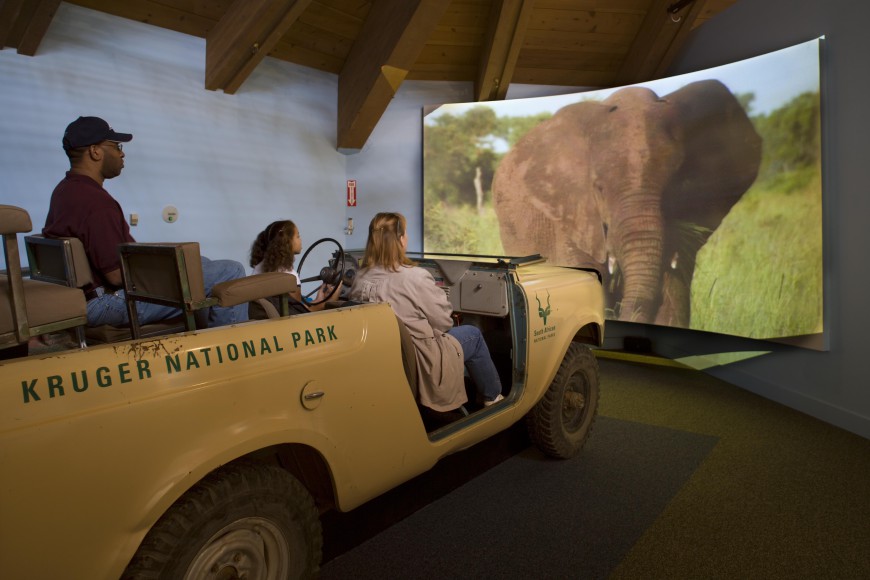 Our World’s Forests
You will first encounter a huge map of the world which highlights forest types and how peoples of the world use forests. Artifacts and flip books will encourage you to learn about wildlife, forest values, and meeting human needs.

Trans-Siberian Railway
As you journey through the cold landscape via the Trans-Siberian railway, you’ll encounter people who depend on the boreal forest for their livelihood.

Chinese Tour Boat
Next it’s time to take a boat ride on Songhua Lake in Changbai Mountain to learn about population pressures on China’s temperate forests.

South Africa
Now a jeep ride through Kruger National Park is the perfect way to view wildlife in a sub-tropical forest!

The Amazon
And finally, step inside a canopy crane for a simulated ride up into the treetops of Brazil’s Amazon tropical rainforest.

Our Leadership Hall showcases the biographies of individuals who have made significant contributions to the forestry profession. More than 200 leaders have been in inducted since 1971.

The origins of the World Forestry Center date back to the Old Forestry Building from the 1905 Lewis and Clark Exposition. Photos and history of the “World Largest Log Cabin” tell the story of the building’s beginnings and its destruction in 1964.

Hideouts Under the Forest
See the animals that live under the forest.

Underwater Explorer
Find out why forests are important to rivers and streams.

Who Owns the Forest
Learn how public and private ownership is divided and how Oregon’s forests are managed using one of three strategies.

Timberjack Harvester Simulator
Learn to operate a timberjack harvester just like the professionals do.

The World Forestry Center Discovery Museum is the ideal destination for any group. Most groups arrange programs 4-6 weeks in advance. Please allow 90 minutes per visit.

END_OF_DOCUMENT_TOKEN_TO_BE_REPLACED

Any cookies that may not be particularly necessary for the website to function and is used specifically to collect user personal data via analytics, ads, other embedded contents are termed as non-necessary cookies. It is mandatory to procure user consent prior to running these cookies on your website.