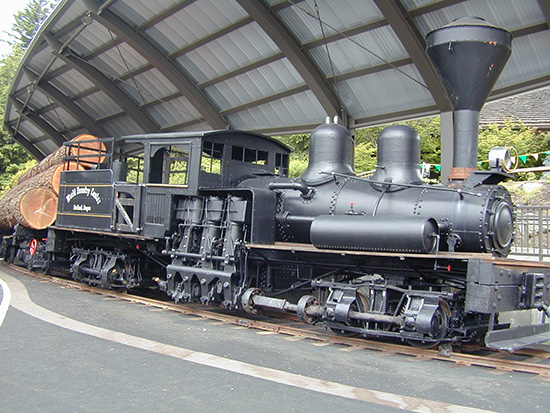 All Aboard Our Vintage Steam Engine!

Located on the World Forestry Center campus, “Peggy” is a beautiful 42-ton Lima Shay-geared locomotive who has hauled an estimated billion feet of logs in her lifetime.

Built in 1909 by Lima Locomotive Works in Lima, Ohio, she was shipped around Cape Horn to Seattle and a few years later purchased by the Stimson Lumber Company. Peggy spent her life working first in forests of Washington and then Oregon.  She survived the Tillamook Burn and was retired from logging in 1950.

Peggy was donated to the City of Portland and proudly stood guard at the original Forestry Building that was built in 1905 for the Lewis and Clark Centennial Exposition. She survived the 1964 fire that destroyed that building and was then moved to Oaks Park in southeast Portland for storage.

In 1969-1971, members of the Pacific Northwest Chapter, National Railway Historical Society (PNWC) rebuilt the cab and wood sills in preparation for her move to the World Forestry Center. In 1972, with television cameras rolling, Peggy made her way up Highway 26 against the traffic flow where she was placed behind Cheatham Hall.

In 2003 the Lilley Family Foundation generously donated funds to refurbish Peggy, build a shelter for her, and move her to her current prominent location.  Once again Peggy found herself in front of television and newspaper photographers as she was gently lifted by a large crane and placed on her new tracks.

The name of the Shay locomotive can be traced back to the man who was instrumental in its development, Ephraim Shay. Born in 1839 in Ohio, Shay would be a schoolteacher, soldier, husband, father, merchant, railway owner and inventor before he died in 1916.

Logging in the 1870s was done during the winter months when it was easier for loggers to move cut timber to the mills on sleds drawn by horse or oxen.  This inefficient and weather-dependant way of logging promoted Shay to build a tramway.

“In 1873 I owned and operated a sawmill at Haring, Michigan. Business was dull and prices barely paid expenses. I was compelled to reduce cost or quit. Logging cost $3.50 per thousand from stump to mill, using horses and logging wheels, the best known plan at that time. I built a tramway using maple for rails, procured a double-truck car, and tried the plan out; resulting in reducing cost of logging to 1.25 per thousand, but the cars would catch the horses on the downgrade sometimes and kill them. Brakes were impractical. Logs run from 12 feet to 75 feet in the same bill sometimes, and trucks had to be separated to suit the load. We usually let the cars run down alone.”

Shay was determined to improve his methods. He recognized that ordinary steam locomotives were not well adapted to the rough roadbeds in the woods, so he developed  a locomotive that was basically a flatcar with a boiler mounted on it. Smaller wheels and flexible railway trucks beneath the body allowed this locomotive to maneuver better on the tracks. But the biggest change away from the standard locomotive was rather than two horizontal cylinders up front, Shay used two or three vertical cylinders located just ahead of the cab. To make room for these cylinders, the boiler was moved from the center of the body to about 15 inches left of center.  Crank shafts connected these cylinders to a flexible drive shaft.  These improvements created a locomotive that delivered equal torque directly to wheels on both sides of the engines at the same time. This allowed a more stable environment in which trucks could move independently and therefore had very little difficulty following poorly constructed roadbeds.

Most of the Shays used throughout the world were built by The Lima Locomotive Works, in Lima, Ohio. They were referred to as Lima Shays. Although developed in the late 19th Century, Shays were built by Lima well into the first half of the 20th Century.

Any cookies that may not be particularly necessary for the website to function and is used specifically to collect user personal data via analytics, ads, other embedded contents are termed as non-necessary cookies. It is mandatory to procure user consent prior to running these cookies on your website.